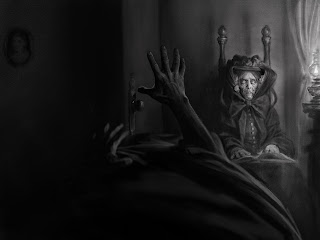 “How many of our daydreams would darken into nightmares if there seemed any danger of their coming true!”Logan Pearsall Smith

Stelazine may cause tardive dyskinesia--a condition marked by involuntary muscle spasms and twitches in the face and body.”

How charming.  When they brought me to the hospital, I died.  That is a bit vague, and maybe somewhat untrue.  My heart stopped, and they had to spend an uncomfortable period of time resuscitating me.  I’m not exactly sure how we can define the boundaries and threshold of death, as I only tried it this once and I was too young to think to look for any sure signs.  In any case, I was about as near to death as one would like.  They were able to revive me.  The doctor sent me home that day, with the strangely callus comment, “We did all that can be done.  The next three days will tell, he could die at any point in the next three days.”  For the next three days I was stoned.  I would walk, leaning to one side, pause, smile with half my face, drool, and then pass out.  I recovered without any of the above side effects, but maybe two others, or one and then another born of the first.

It might be worthwhile to note, the former term for these hallucinations, whether manufactured or natural, the inner cosmos, and the madness and creations it induced was called “art”.
Posted by Paul Mellender at 12:28 PM No comments:

Hello. How are you? You look great! Have you (gained/lost) weight. Well, it suits you! I’m well thanks for asking.

So art block.  For a little over a year I have been trudging through an expansive art block. It has been, in the words of Abraham Lincoln: “About as fun as a chapped ass”.  It has very recently faded and slipped away, but it has been troubling.

Let’s go through what art block is and then some stuff to work through.

Art block isn’t one thing!  Surprise!!  I’m sure you are aware of this but just to be sure we start out with a good premise.  It can include stalled imagination, lack of ability to focus, dissonance between expectation and skill, slipping into tedious habits, distortion in proportion, forgetfulness, and difficulty.

Let me address this last first.  With any expertise comes ease.  Even something like automation.  You don’t need to think about it, it just happens.  Here is a brief video about it:
https://youtu.be/-nhRPVWM9A0

With expertise comes an expectation of ease.  You go into projects with the ease of moving your fingers or walking.  But like suffering an injury to nerves these ready actions can become shockingly difficult. This effect is called “the yips” in golf, but has other names in other sports and playing musical instruments.  Your brain, amazing as it is, is a fallible, ever shifting, thing. It builds patterns based on repetition and value. It takes time to reconfigure, rewrite, and shift. At times it can get tangled and overworked. It can even propagate misreads. Visual art (ooph, I hate these terms but it will have to do) is a highly complex set of activities and unlike golf and single musical instruments isn’t quite as dependent on one family of interactions. The yips aren’t as likely to end a career in art as they are in golf.  Fortunately, as part of the package an artist will have to reinvent physical and mental methods fairly frequently.  But that isn’t to say it is a walk in the park.

A way to deal with the aspect of difficulty is changing media, study (without practicing-just look and solve), exercise, and deliberately breaking habits.  Find a habit, break it. There won’t be immediate results.  Creating new patterns and standards in your brain takes time, so just ride the disappointment and frustration as calmly as possible and proceed.  What else can you do?

Stalled imagination: This can be related to “the yips”.  None of the aspects of block is independent of the rest.  But strangely the fix might be indirect.  Sometimes when you draw a face the nose doesn’t seem right.  So you redraw the nose about 50 times until the paper is compromised and tattered.  It finally dawns on you every nose was acceptable, it was the eyes and mouth that were the offenders. Your point of focus is off-you are fixing what isn’t broken. Your attention lands on the thing that points out the problem not the problem itself. It is misattribution based on new awareness. Stalled imagination is much like this.  The problem isn’t your imagination the problem is boredom, or a lack of new information to feed novelty and discovery.  You have retread the alleys of your best art high too much, and need new things to learn.  I don’t mean new art things to learn (though that may be a parallel part), I mean in your life.  You need to do new things, face new challenges, difficulties, joys etc.  Your imagination is dependent on your ability to be actually alive and subject to experience.  Don’t believe in the “introvert” myth.  To draw worlds you have to live in the world.
Current events take note.

Lack of ability to focus:  This one is rough and has many factors…and few fixes. So attention is an expansive issue.  Some of which is chemical, or dependent on brain function that is highly variable moment to moment. Depression can affect attention, as can caffeine, sound, driving awareness (like thinking of the action of your fingers while trying to draw, or the actions of your hands or eyes while driving), among many other things. So what do you do?  How do I know?!  I’m not your dad!  Wait…sorry, sorry, lost track of the convo…

Like that last sentence…divert attention in a completely different direction.  As it is so variable and some of it out of reach for fixing, diverting and doing something else might be in order.  If it is persistent there might be underlying physical or chemical issues to consider.  Nothing interrupts attention, memory, and continuity like an overload of stress hormones. This may include living conditions, work conditions, or disorders.
Shut off the damn news!  Seriously-it is in made to sabotage attention and continuity to create addictive “watching” habits - eyes on screens and compulsive clicking.  That’s why it is persistent cliff-hangers.  It is herding to the next click.  Read the news if you have to, but avoid attention destroying habits.

Dissonance between expectation and skill:  Drawing is a complicated process.  It incorporates many cognitive functions- subtle and overt.  Some have to do with your ability to control and measure pressure and angle.  Other parts have to do with projecting agency and “theory of mind”.  Still others have to do with how your brain understands your body in space, motion, and angle. Recognition of these experiences is itself a cognitive set.  These are at times competing cognitive functions or are uncoordinated.  Your expectation of what you can do, or your standards, can jump ahead of your mechanical knowledge.  But it will seem like you should know how to do it.  But this is a misunderstanding.  It may take a few tries to recognize the problem, but some intensive study will help.  Again, don’t expect immediate results.  It takes some time for your brain to process.

Slipping into tedious habits: Habits!  Part of art is feeding the exploration and discovery of the artist. Without intention we are mapping and projecting our senses of space incrementally into new territory.  Literally.  But we are also satisfied and fulfilled by successes.  It has been noted that addiction is a learning error. Drug addicts have been known to return to the place of their best high as if it magically holds some essence of the high and if they reproduce the ritual of their high it will come back.  This learning error is mirrored in habit.  Ritually returning to actions and sequences that had success becomes extremely tedious and stunts development.  It is a learning error.  Successful tactics become tools and can be incorporated into practice and are additive, repetitive rituals stunt, frustrate and create tedium.   Break your habits and unnecessary rituals, but don’t throw the baby out with the bath water, useful tools and recurring tactics are not habits.

Distortion in proportion:  At times you may find that your sense of proportion in figures, faces or composition are surprisingly distorted.  Sometimes the distortion will be consistent across images.  Overlarge hands, long or squat faces, big torso and small legs, big eyes and small nose, etc. This might be a mapping problem or how you feel vision, and, in turn, how your experience of vision will contort to match the feel.  When you recognize the distortion you can incorporate testing and adjusting this personal idiom in your regular work.  But sometimes your work will suddenly shift, become distorted and messy and you can immediately recognize it. You may note this under the scientific phrase : “My work looks like crap”.  And so it does!  But exercise can help this as can study, as can anatomy study, especially novel study.  Approach studying anatomy looking for a new angle or different approach, as you are likely fatiguing your patterns and entering habits.

Forgetfulness: Again this can have any number of causes. Sometimes the fix is a simple study session or review.  But other times it can be systemic in drawing.  The coordination and sequences you use to create the images can drop out, lose connection, and or stumble along too late. You actually have to think through what was previously automatic.  It can be surprising, disappointing and frustrating to have to manually set up what was so easy before.  Likewise, it can undermine confidence and exacerbate the issue.  It can get so bad you question if you ever knew how to draw or paint.  Again there can be real and serious causes for this.  But barring the worst case scenarios, some fixes include the strange idea of starting over.  Accept, briefly, that you have forgotten forever, or that you never knew and that things are broken.  Then proceed to go study and learn as if starting fresh. Assume: 1. It won’t take very long to learn and 2. It’s not a big deal.  With this relaxed premise in place go study.   You will quickly find you do recall, your anxieties will ease, and you will become very bored as it turns out: you actually do know all the lost stuff and nothing was forgotten.  Abstracting your abilities (like saying “aluminum” or “cinnamon”) seems like forgetfulness and is a sign of fatigue or repetition.

I hope that was helpful.

Posted by Paul Mellender at 5:55 PM No comments: